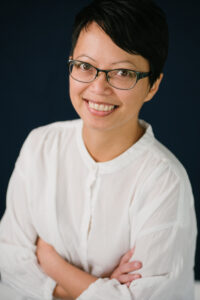 She is a MacDowell Colony Fellow, a Hawthornden Fellow, and a five-time Pushcart Prize nominee for poetry and fiction, with both Literature Wales and the Australia Council for the Arts awarding her grants towards the writing of Disturbance.

Her poetry collections include Mortal, Hollywood Starlet and The Everyday English Dictionary.

Her editing experience includes work for literary and commercial publications in Australia, the US and Hong Kong. She is a former editor for the New Zealand Poetry Society’s magazine, a fine line, and a former co-editor for Verity La.’s Discoursing Diaspora. She also edited the first Aotearoa New Zealand edition of Atlanta Review (USA, 2017).

In 2019, the Australia Council for the Arts awarded Ivy Alvarez a grant to support the writing of a fourth volume of Diaspora. In the previous year, she received a grant from Creative New Zealand, and a stipended residency from the Michael King Writers Centre, towards the writing of a second and third volume, respectively.

Born in the Philippines, Ivy Alvarez grew up in Tasmania, Australia. Having lived in Scotland and the Republic of Ireland, she lived almost ten years in Cardiff, Wales, before arriving in Auckland, New Zealand in 2014.

She is also an actor. In 2017, she signed up with Fourth Wall acting agency.

We never know where Alvarez is going to direct us next.