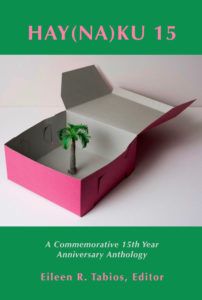 The hay(na)ku form, invented by the poet Eileen R. Tabios, celebrates its 15th anniversary with an anthology, Hay(na)ku 15.

Included are three of Ivy Alvarez’s hay(na)ku, a poem which previously appeared in The First Hay(na)ku Anthology — now translated into Spanish — and a citation of her response to the hay(na)ku form in Abraham Ignacio, Jr.’s Foreword.

Alvarez mingles the earth with animals and sounds, with someone’s mouth — it is a dream dictionary.